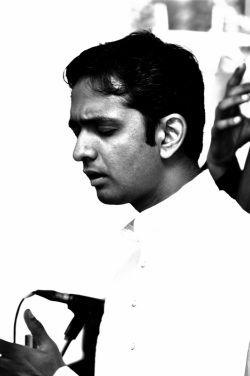 ​Chintan is born in the cultural ambience of Bhavnagar city, Gujarat, an erstwhile princely state with a musical heritage of nurturing stalwarts like Padmashri Pt. Balwantrai Bhatt, Pt. Yashwantrai Purohit, Pt. Rasiklal Andhariya. He received his initial musical tutelage from his parents, both being scholastic teachers of music & musicology and also from their Guru, Shri Laxmipati Shukla, a noted disciple of the legendary musician, Pt. Omkarnath Thakur and Shri Ashvin Andharia who is a nephew of Late Pt. Rasiklal Andharia.


The journey began, with Chintan, after standing first (Bhavnagar Centre) in the Sangeet Alankar examination conducted by Bruhad Gujarat Sangeet Samiti, then joined Lalit Kala Kendra of Pune University for Masters degree in classical music and received National Scholarship from Govt. of India; he completed the course under the mentorship of Dr. Vikas Kashalkar and Shri Vijay Koparkar, the noted Classical Khyal Vocalists.

Chintan surrendered his heart and soul to the tutelage of Guru Pt. Uday Bhawalkar in the true tradition of Guru Shishya Parampara in 2005, Pt. Uday Bhawalkar is the standard torch bearer of Dhrupad of today's India, who groomed himself under Ustad Zia Fariduddin Dagar and Ustad Zia Mohiuddin Dagar, the maestros from the ancient school of music, 'Dagar Vaani', represented by the legendary Dagar family.

Chintan became scholar at ITC Sangeet Reserach Academy in 2013. He was awarded the Junior Research Fellowship from Govt. of India for Dhrupad studies in 2014. He has been honoured 'B High' grade by All India Radio as a Dhrupad Vocalist. Chintan has been performing in many major festivals in India and has been touring abroad for his concerts and workshops regularly. He has performed and conducted workshops in Canada, UK, USA, Germany, and Austria. He is also very good in teaching online classes on Skype.